Vol 1 & 2 of the BBC show Skins is beyond brilliant! Amazing story lines, well developed characters-some of the best I have seen actually-superb acting and directing. Watch it, you will love it!

It’s been awhile, sorry about that. I have been writing my daily ghost stories

and that has kept my other blog writing down.

I have started a new spec script for spring submissions, and my own pilots are chugging along. I am doing a complete re write to my first pilot because after a lot of people reading it, they seem to want that.

No news on the film sale…any day now.. please…

Ryan Murphy has not hired me onto Glee yet.. geez what is he waiting for?

That’s about it.. I will be posting film reviews and stuff again soon..

Hope all your writing is going well!

Thank God for small favors!! I hated the idea of Harry Potter in 3D. I hate 3D films in the first place. Not talking about animated films, but rather normal live action films that they ruin by turning them 3D.

First of all, it does not enhance the experience. I mean, how lazy are people that they can’t watch a film and enjoy it without feeling like they are in the bloody thing?

Second of all, the tickets cost a lot more  AND you have to wear glasses that tons of people have worn.

This is the best news I have heard all day. And before you feel sorry for WB, they will still make plenty of money.

Deadline Hollywood is reporting that Warner Bros. announced today it will release Harry Potter and the Deathly Hallows in 2-D only. The press release sums it up best:

“Despite everyone’s best efforts, we were unable to convert the film in its entirety and meet the highest standards of quality. We do not want to disappoint fans who have long-anticipated the conclusion of this extraordinary journey, and to that end, we are releasing our film day-and-date on November 19, 2010 as planned. We, in alignment with our filmmakers, believe this is the best course to take in order to ensure that our audiences enjoy the consummate ‘Harry Potter’ experience.”

This is a huge deal. It means Warner Bros. is leaving significant cash on the table as the studio could have charged an extra $3.25 per ticket extra for the film.

But Warner was burned earlier this year when it converted the film Clash of the Titans into 3-D after it had already been shot in 2-D. The film earned $493 million at the global  box office but the quality of the 3-D was so bad that it threatened to turn audiences off to the cash-cow phenomenon that 3-D could be.

They had to make sure that the conversion on Potter was significantly better than on Titans or risk the biggest franchise in Warner Bros. history.

The fact that the studio backed off says a lot about the leadership of Barry Meyer and Alan Horn (who is on his way outat the studio). The decision will probably mean more to the future of 3-D than anything since Avatarbecause it will give audiences faith that the studios are only putting out quality work.

After seeing Wall Street (2), there are about three things I am absolutely positive. First, New York is awesome. Second, there is a part of me, and I don’t know how dominate that part might be, that wishes for a lot of money. And third, if I was 24 I would be unconditionally and irrevocably in love with Shia.

I know, he is super young, but I think in about 10 years, he is going to take over Hollywood. He did a great job as leading man in this film.

I had no idea that Oliver Stone was directing this one as well. I saw the trailer, liked what I saw and went to see it. The first Wall Street was always one of my favorite Stone films and I always like Michael Douglas, so knowing that Gordon Gecko was returning, it seemed like a no brainer.

I thought the film was well written, well shot, well scored and over all well acted. I wasn’t in love with Susan Sarandon’s strange Long Island accent, and didn’t think her character was really needed, but it was okay.  I also thought that young Shia would have fallen deeper into depression after losing everything, and I thought they wrapped it a bit too fast.

That said, it was enjoyable. The experience was fun.

Everyone loves a film about money. I would say if you like the first one, you will enjoy this one. And, Bud Fox makes an appearance, so come on. What are you waiting for? Go see it! 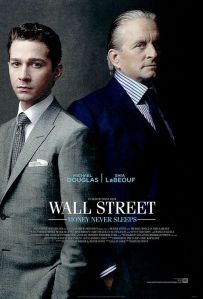