I don’t agree with you on your feelings. You have the right to them of course, but I disagree. I do a lot of volunteer work for suicide organizations and have for the last 14 years so this is something I know a lot about.

I think on a show that aired once a week then yes there needed to be phone numbers and warnings in every episode, but since Netflix chose to show it all at once-meaning you could binge it-I think to have that pop up ever 40-50 minutes would have been worse. I have attended more than 10 workshops about TRW since it’s release through mental health & suicide prevention organizations, on both sides, so I know the arguments and they are valid. But I still disagree.

I know it’s uncomfortable for parents, but the show was real and raw. The book and the show were exactly like my high school in the 80s. Now it’s 2017, kids are having sex, kids are bullying, kids are struggling and I loved how it showed all the kids and why they were the way they were.

It’s important to understand that just because a parent blames the show, that doesn’t make it the show’s fault. I personally know TWO TEENS who didn’t commit suicide because of the show. And there have been others who I have heard about in my volunteer work with suicide.

The press against this show is only talking about a rise, but the truth is the rise was happening anyhow.

And unfortunately, any story about suicide is going to have people, even experts on both sides saying it helps and or hurts people. I know that Jay Asher (author of the book) and the producers talked about this at length.

I hope you understand why I am responding finally. I think having an open dialogue is important, but I have been really afraid to say anything about this subject publicly.  But I have seen good come out of it too.

I think the mistake that Netflix made was allowing it to be streamed all at once. I think because of the content, they should have released it slower, once a week or once every two weeks. I think they should have had mental health and suicide disclaimers after each show IF they did that, but since they allowed it to be watched in one sitting, I think they did the right thing with the extra episode and the warnings.

These are just my thoughts about this very important show.

I’d love to hear yours even if they are different than mine, but no bashing of any kind about the show, anyone who is suicidal or has committed suicide, negative talk about suicide/mental illness, or bashing of the author or producers will be tolerated. If you are on the other side of this that’s fine. I’m simply posting my thoughts about it. 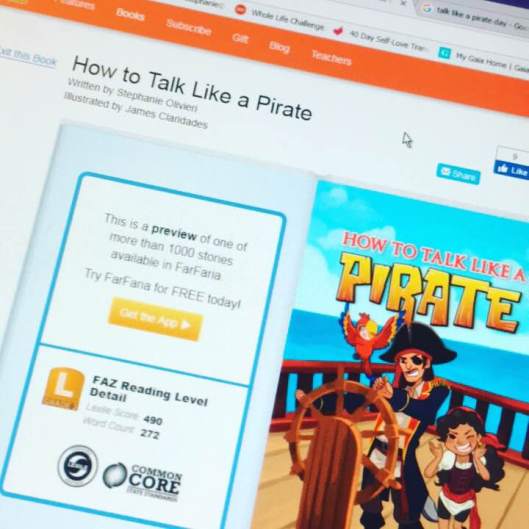 Today is talk like a pirate day and it reminded me of this book I wrote for the mobile app #Farfaria in 2013. I wrote a few for them in the two years that I worked from SoCal for them when they first got started. They have over 1000 titles. This is one of 16 that I wrote for them.

Now, I’m mostly concentrating on my YA books, but since I’m also an illustrator, I may swing back around to picture books someday.

The truth is that I love storytelling in all mediums!!

I hope you are all doing fabulous and I promise in 2018 I’m launching a lot of new things for writers, including Vlogs, blogs, tips, freebies and more!!